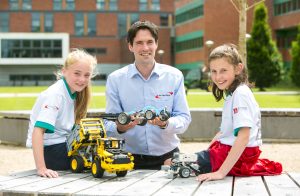 A new programme was launched this morning to encourage more students, particularly young women, to study and pursue careers in engineering. ‘ECubers™’ has been developed by SL Controls, one of Ireland’s leading Equipment Systems Engineering firms. The programme aims to help foster the technical skills required for a career in engineering – using all-round favourite, LEGO®.

Young women are seriously under-represented in the engineering sector at a time of growing career opportunities in Ireland and abroad. Just six percent of students who sat Engineering in this year’s Leaving Certificate exams were female. There is also a significant gender imbalance of 3:1 in favour of young men studying physics*, an important factor in the low take-up of engineering among women at third level. This is despite the fact that girls outperform boys in the subject **. 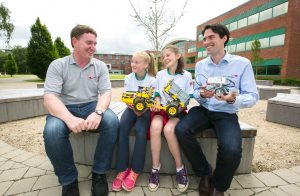 Shane Loughlin, co-founder of SL Controls, with over 30 years’ experience in Equipment Systems Integration, is a leading figure in developing Industry 4.0 education through his current PhD studies at DIT. He created and runs SL Controls’ ECubers™ programme to address the shortage of young people pursuing careers in the growing Engineering Sector, particularly the lack of female representation in the sector.

Speaking at the launch of ECubers™, Shane Loughlin explained, “Historically engineering is seen as a male oriented subject that leads to a career in Civil or Mechanical Engineering.  Very little has been done to explain to young people how Engineering has evolved over the last 20 years and the range of exciting career opportunities that now exist for both men and women in the field.” He went on to say, “ From our pilot workshops we have found that ECubers™ has been very successful at introducing the concept of a career in Equipment Systems Engineering and it is evident that much broader awareness is needed if we are to maximise the potential of attracting young people, especially  young women, to study Engineering.”

Through ECubers™, SL Controls shares its knowledge with young people so everyone can build, program and invent better equipment using the fun, flexible and colourful LEGO® TECHNIC and LEGO® MINDSTORMS® products. The name LEGO® originally comes from the Danish phrase ‘leg godt’ meaning to ‘play well’. The phrase also translates to ‘I study’ or ‘I put together’ in Latin. SL Control’s ECubers™ programme encourages students to put together equipment systems while playing together in a learning environment. The company has invested over €15,000 in LEGO® products for the programme. With demand increasing for good engineers worldwide, SL Controls are working to ensure Ireland maintains its high standard of education in the field and to attract more students to study engineering. 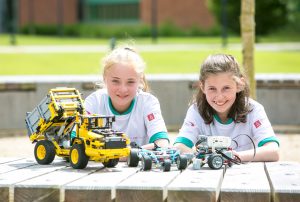 SL Controls employs a team of over 50 engineers and has announced 20 new engineering positions by early 2017. Keen to foster the top engineering talent, they hope to roll-out ECubers™ to primary and secondary schools across Ireland over the coming years.

Pilot ECubers™ workshops run with 50 students have shown that Transition Year students experienced a better understanding of the existing professional engineering roles, such as systems engineers, mechatronic engineers and project managers, through ECubers™. 75 per cent of students said they were surprised at how interesting they found the project with 95 per cent saying they experienced great satisfaction from getting the equipment working.